What Do You Do When You're Stranded in Tulagi? 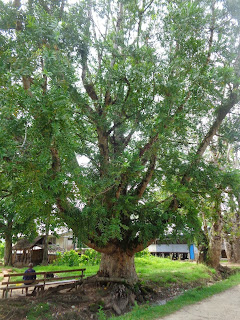 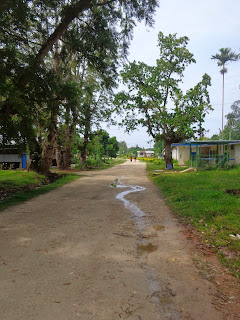 We spent Saturday exploring Tulagi (which, it turns out, is the name of the island as well as the town).  We walked down to the market, passing ancient trees (I love how huge this tree is!), strange blossoms that look more like ornaments than flowers and seeds, and various other 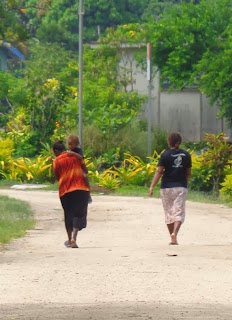 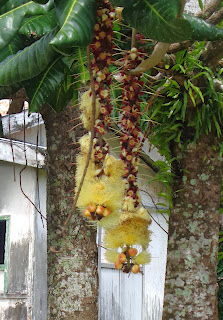 Tulagi doesn't have any paved roads - the entire perimeter of the island is about 11 km (7 miles or so?).  All the roads are more sand than dirt, because this really is just a tiny island.  It was originally British, and they established the town of Tulagi as their capital here in the Solomons. 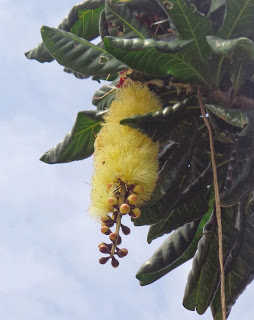 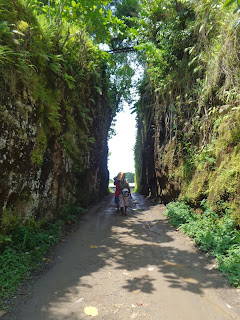 brought prisoners to these islands - and it was the prisoners who dug through the bedrock to create "The Cut Place," almost a tunnel through a hill linking the town with the wharf. 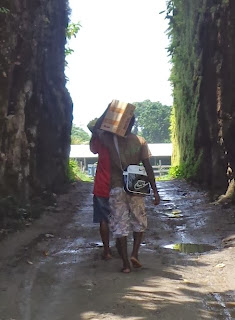 selling.  There was a tuna cannery at one time, but the company moved to another island which is larger, so that they had room for expansion.

People sell extra items that they grow - pineapple, bananas, watermelons, coconuts, various root vegetables - although the market was rather sad and limited.  And people often have small market stands in front of their homes, so they can sell items from there as well (or instead of) the actual market. 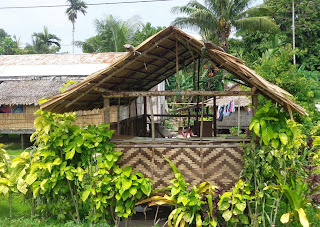 We walked around the market a bit, and headed back to our place.  We walked along with some people going in the same directions - people here are incredibly friendly and helpful, and curious about where we're from, what it's like there, and what do we think of the Solomon Islands. 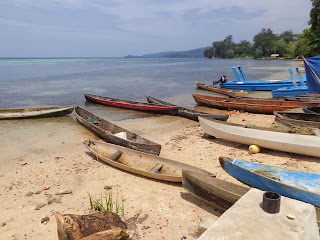 We also get asked frequently how  we heard about the Solomon Islands - and of course, that usually turns into a discussion about WWII, because most Americans only know about the war and all the fighting centered around Guadalcanal.  We've been told about the tunnel hideouts the Japanese dug in the hills, where they could fire out of one side, then run through a U shape and fire out of the other side, confusing the Allies.  We've 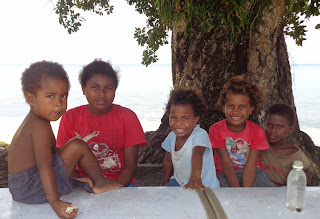 heard stories about how the Japanese took food from gardens, or farm animals, and took women as well - but that the Americans weren't like that, and that is why the American soldiers are remembered in a much more friendly fashion - and why they were so welcomed at the time, and treated so well by the islanders.  I asked what the islanders did when the bombs fell here, because the island was bombed so heavily there isn't a single building left from the 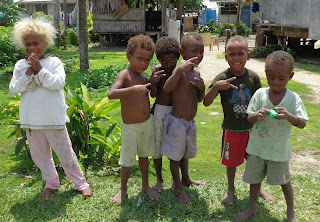 British colonial period.  The answer - they ran and hid in the bush, building leaf (thatch) houses to live in while the bombing went on.  All this on an island with an 11 km perimeter!

The children here, as children everywhere, are just cute and funny, and trying to be cool.  They seem happy to be photographed - in this middle group, when I asked the first two children if it was okay to take their photo, the other four boys to the right came running out from underneath a house on 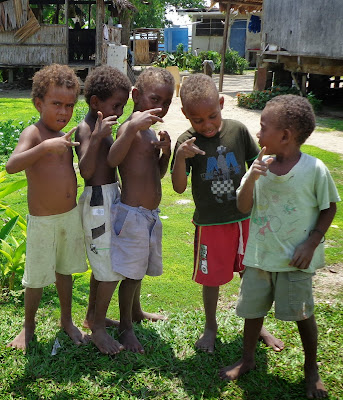 stilts, to get into the photo!  I just laughed, they were so funny!  Of course, I'm not sure where the gangland style hand gesture comes from - most likely TV, movies, CD covers, etc.  Something they saw somewhere else.

And I think our little blonde is a girl, given her clothing and longer hairstyle, plus the fact that she wouldn't get too close to the group of boys.

We also walked by the art center - here, as in Honiara, there is an annual Pan-Pacific fine and performing arts festival, and so there's a beautiful building for performances, some smaller buildings for other functions and activities, and a series of interesting sculptures.  It's too bad that this place isn't used any other time of the year, since it really was a lovely structure and almost like a sculpture park. 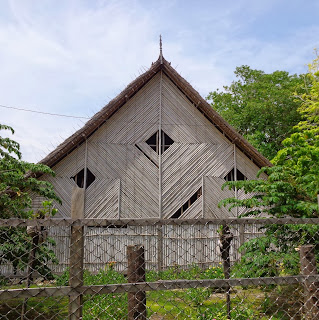 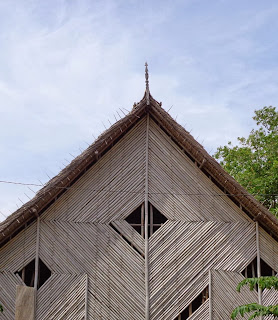 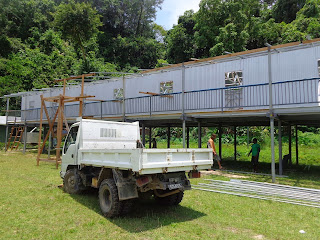 We ran into Dan, the guy from Seattle who works with Construction for Change, the nonprofit organization that is building the school at Blue Beach.  He and James, the project supervisor (a volunteer, but in charge of the 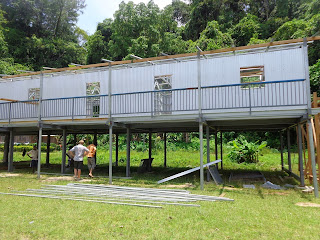 project), invited me along to see the school.  So I hopped in the truck after they loaded up all the metal beams and posts, and headed out to Blue Beach.  (Richard helped load the truck, and then was ready for our AC room - this place is HOT!)

Anyway, they are building a new building for the school - I peeked in some of the old buildings and they really are crumbling.  This weather, as in the VI, is just hard on most 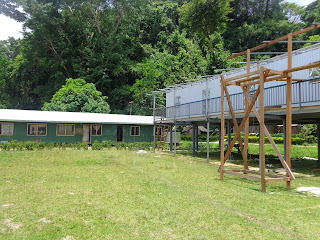 elements.  The school is K-12, but this particular structure will be for the secondary school, with academics upstairs and maybe a science lab and office downstairs.  Most of the workers are local men, so the project provides employment while also adding much needed classrooms for the school.  There were a few classes in session, even though it was Saturday, because final exams begin on Tuesday - and the exams qualify students to move up a grade, or a form as it is called here. 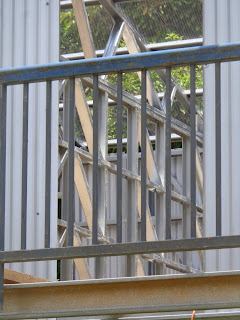 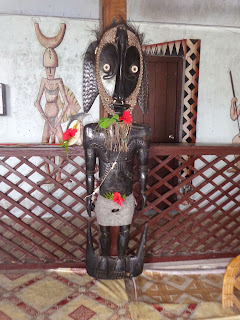 I asked James what it's like to volunteer for this kind of project -  he said it's pretty frustrating, because it has seemed as if everything that could go wrong HAS gone wrong.  He hasn't encountered any WWII objects like shells or casings or anything - and he said he's very unsuperstitious - but sometimes he has wondered if there's just some kind of paranormal reason things keep going wrong.  Because this school is located at Blue Beach, where half the Allied forces landed (the other half going to Red Beach on Guadalcanal) - and casualties were heavy.  We talked for a bit about that - and, having spent two years in Africa, I know that there are things we can't rationalize away.  So I suggested that maybe he get the village medicine person (whatever they are called here) to come lay the spirits to rest - and, while he was at it, to tell the spirits that this project is funded by Marine Raiders who were part of that invasion and who survived, and this is their way of thanking the people of Tulagi.  He agreed that, while it might seem fanciful to some, this probably would be a good idea.  Solomon Islanders, like many people around the world, may seem superstitious to the "scientific" mind - but sometimes there are realms that are not part of the physical world.  So there may be some spiritual realm that is uneasy - and especially at a battlefield as bloody as these islands are.

Anyway, please check out Construction for Change -http://www.constructionforchange.org/ - they really are doing good things around the world!  (And if you want to make a donation, they definitely need support!) 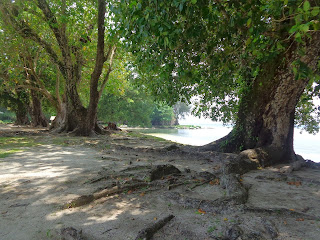 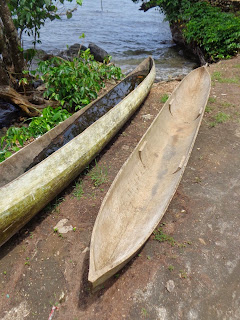 So of course I went to look at the beach, which was peaceful and hardly seems the site of bloody battles and wholesale slaughter - but battlegrounds rarely appear as haunted as they feel.  It's a pretty beach, with old trees that either survived the battles, or have grown up since that time. 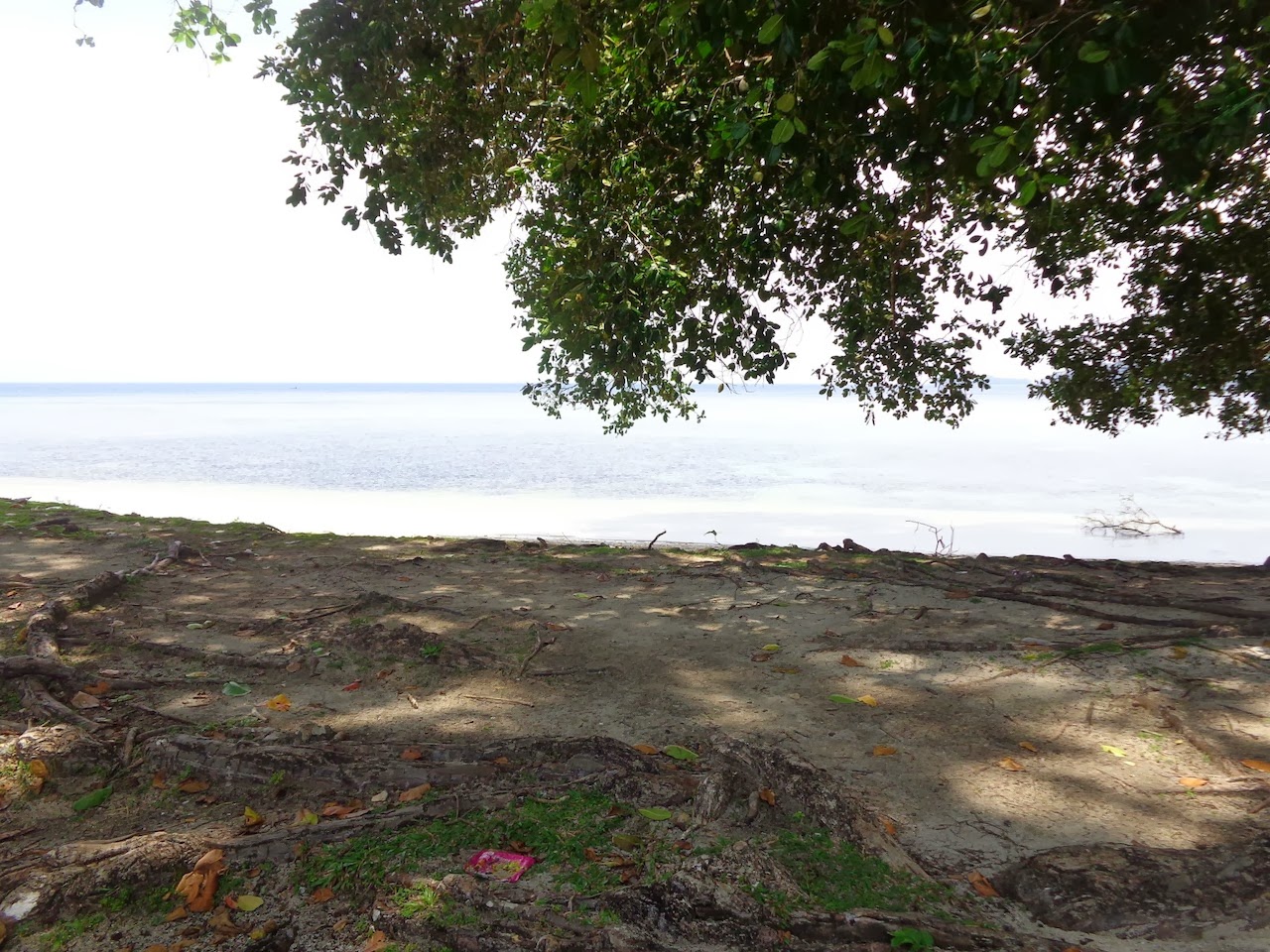 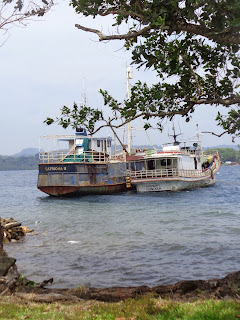 So, we need to spend another night here in Tulagi.  We planned to catch the ferry back on Sunday afternoon.  Guess what engine still isn't working? 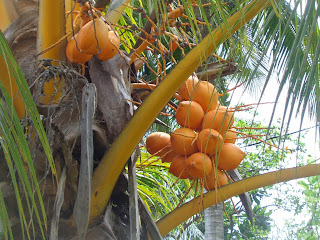 We've had a relaxing Sunday - not much to do, and no point in fretting.  We called our hotel in Honiara, the lady said fine no problem.  Our hotel people here said they have a small twin engine outboard boat, and they can take us across on Monday.  We're still hoping the ferry is working by then, since a small outboard is not going to be the most comfortable ride across the sound - it's an hour on the ferry, and sitting on a wood plank in a small boat isn't going to be fun.  But if that's the only way across, then that's it.  What can you do, you know?  Life happens.

So we'll report in on Monday, and let everyone know how we crossed Iron Bottom Sound.

Posted by Phebe and Richard at 1:31 AM