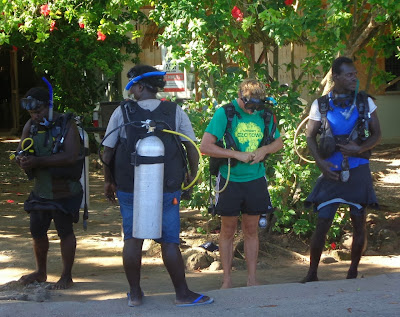 Wow, what an amazing day!  It started with the torch for the Commonwealth Games being run through Gizo – our dive shop friends dressed in dive gear and stood out on the road as truckloads of people came by, as well as groups of kids jogging along behind the runners with the torch.

One truck stopped right by the dive shop, and I actually knew two people in the crowd!  Our waitress from PT 109 café, and one of the ladies I met on my 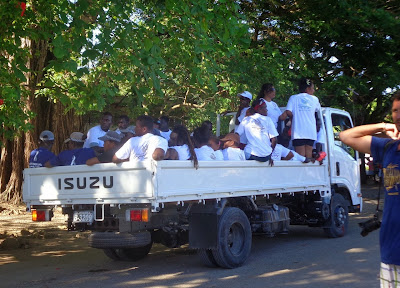 siputa quest yesterday, were both in one of the big trucks.  Of course I went over to say hello, and wished them well on their run.  I was just amazed that I knew some people!

And of course the kids – I had to get photos of the adorable kids, who crowded around and smiled and posed for the photos.

After all the excitement outside passed by, we went in and everyone got all the gear 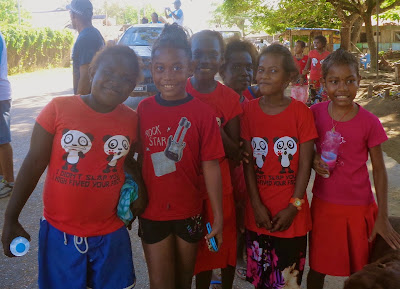 together.  The plan for the day was to dive to Toa Maru in Kololuka Bay, at the north end of Gizo Island, have lunch during our surface interval, and then dive Grand Central Station (don’t you love the names people give dive sites?) which is close to the Toa Maru.

Oh, before I forget, the dive shop is Dive Gizo and they are terrific!  Here's their website, they are definitely the place to go to for 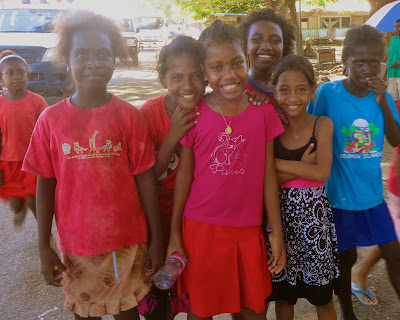 diving in this part of the Solomons:  http://www.divegizo.com/       And look around their website, you can see the fish and some of the sites we dove with them.  Especially since I don't have photos of that stuff.

We loaded up the boat with the gear, and set off.  And promptly saw a few dolphin swimming and diving – one of them a little baby dolphin!!!  They always portend a great day.  And they didn’t disappoint! 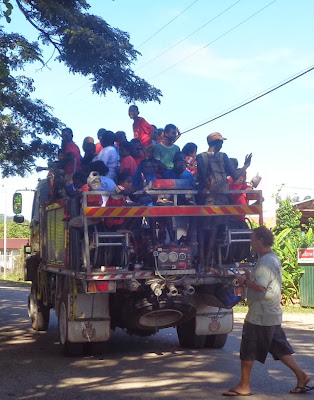 The Toa Maru was a Japanese cargo ship during WWII.  It was sunk in 1943, when it was torpedoed by the Allied forces.  The ship made it close to Gizo Island before it went down, so the crew were all able to swim to safety.  (I don’t like wrecks were people died, they have sad spirits around them.)  The ship went down sideways, torpedoed section facing up and the top deck perpendicular to the sea floor.

It was an AMAZING dive!  We went down to about 75 ft, or 25 meters, kind of in the middle area of the wreck.  The aft section is deeper, and we headed over that way, though my buddy Jules and I stayed at about the 75 ft level rather than going deeper.  We could see the cargo holds, rolls of cable for the cranes and winches, all kinds of gear that I couldn’t identify.  And all kinds of metal rigging and various structures that made fun 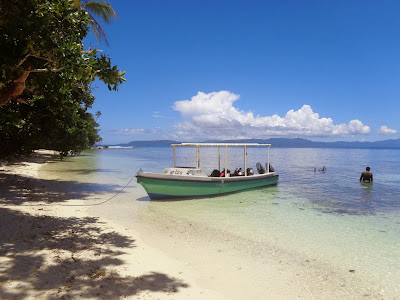 swim-throughs.  We turned around and headed to the fore section, passing sake and beer bottles, as well as ammunition and guns (because even a cargo ship had to defend itself).  There may have been stairs, or ladders, but it also may have been just railing or siding that was twisted and displaced.

And then, through the ship, we could see the huge hole where the second torpedo hit – through the side and into one of the fore cargo holds!!!  Wow, I’ve never seen such a huge hole in a metal 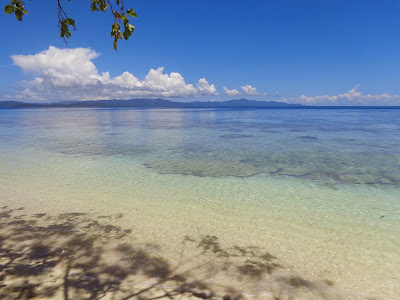 ship – it really made the sinking of this ship so much more real and ominous!  Because even though the ship is old, having been underwater for 70 years, it’s now covered in beautiful coral and all kinds of tropical fish, so it doesn’t look like a warship anymore, it looks like a pretty coral garden where mermaids would swim.  It’s easy to forget that this was during a bloody and destructive war, this was a Japanese ship, all that.  So suddenly seeing the hole where the torpedo ripped into the ship 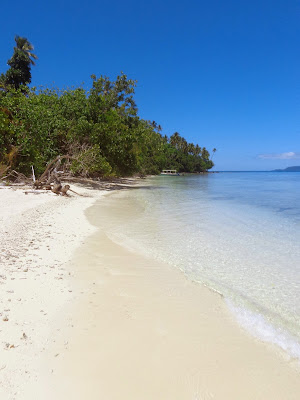 When we swam over the top of the wreck (the side of the hull), we saw table coral, big rounds of deerhorn coral, various soft corals, anemones, and all the small fish that go along with all that – electric blue or neon turquoise or fluorescent yellow fish darting from coral to coral, a few clownfish families, angel fish, butterfly fish, just constantly moving around like colourful butterflies and birds in the mermaid garden.

All too soon it was time to head up for our safety stop, and then back to the boat.  Then we headed to Djenny Island, a tiny island just north of Gizo, for our surface interval and lunch.  We walked around the island, which has great views of the neighboring small islands as well as the other side of Gizo, played with hermit crabs, and ate a nice picnic lunch of 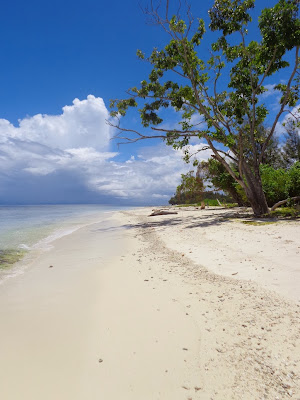 Because the first dive was fairly deep, and the second dive would be almost as deep, we had a two hour surface interval.  Then it was off to Grand Central Station, just off Djenny and around the corner, where there are cross-currents where one wall of rock and coral ends and a channel begins – these areas where the current cross means that a lot of nutrients are swept in, and fish come to feed – small fish eat the nutrients, medium fish feed on the small fish, big fish on the medium fish.

We dropped down to a sandy area, and headed down following the wall.  There were lots of fish hanging out there – but then, at the end of the wall, there was sort of a plateau, and this has been named Grand Central Station.  We immediately saw a Napoleon wrasse, which is a GIANT kind of fish!  I mean probably 4 to 6 feet long!  (1.3 to 2 meters)  HUGE! 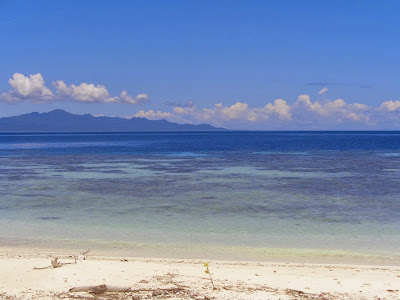 Shaped like a goliath grouper, and probably weighing at least 200 lbs!  HUGE!

The current was pretty strong here, so our two student dive masters found spots to hook into – yes, they carry blunt hooks to fit onto crevasses in rocks or dead coral, and then we divers can just hold on to the line and not worry about kicking hard to stay in one spot – we can just watch.  Jules’s hook had a long line that she clipped onto my 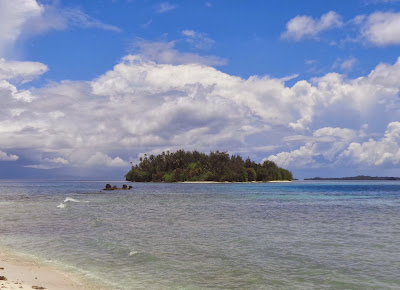 vest, so I could let go and just fly in the current!  Okay, so I really stayed put and the water rushed by me, but it felt like I was flying!

Then schools of tuna, and batfish, and what looked like giant angelfish, and maybe yellowtail snapper, then maybe some flying fish, nearly a hundred fish in each school, thousands of fish all over, and all kinds of little fish, and then OMG sharks!  One shark way out, just a shadow!  Then another shark, swimming around looking at fish, trying to decide if he was hungry or not – just a grey looking shark, 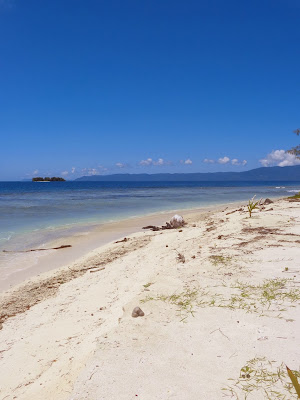 maybe 3 or 4 feet long.  Then another shark, also thinking maybe lunch, maybe not.  More and more fish, all around – it was almost dizzying!  I don’t think I’ve ever seen so many fish all at once in one location!  I truly didn’t know which way to look!  Absolutely incredible!!!!

We could only stay there about 20 minutes, because it’s fairly deep, so then we headed back the way we came, along the wall.  Groups of clownfish were hanging out in their anemones, and as we went by one mama clownfish decided I was way too close to her babies and she came out toward me.  I just swam by and we looked around at more coral, more fish – I was entranced by the little colourful fish hiding out in the deerhorn coral again, so many fish that the whole mass was like a moving and vibrating rainbow-coloured coral.

We turned around and headed back, and I passed mama clownfish again.  This time, I got closer and really looked at the family, with several babies playing in the anemone.  Well, Mama Clownfish got REALLY upset and decided she needed to scare me off, so she swam up to just inches from my mask!  Really, this little fish, maybe 4 to 6 inches long, got all up in my face to make me go away and leave her family alone!!!  It was just so funny, because they are just such cute fish and there was no way she was going to look mean, no matter how hard she tried!  Plus there aren’t too many times I’ve been threatened by a fish smaller than my hand.  Just exciting!

Again, back to the boat, gear off, climb in, and head back to town.  And all too soon we’re saying goodbye to our dive buddies and the crew, and heading back for showers, snacks, a rest.

We went back to the Gizo Hotel for dinner, and they had a different dance group tonight.  The boys were really into the stomping and slapping moves, but there was one little girl who was really an exceptional dancer.  All of maybe 11 or 12 years old, she had the most expressive arms, and she could move as if she didn’t even have bones in her body.  Really, she was something special!  We talked with the kids when they were finished, and I told her she needs to continue with dance, she really is very good.

Anyway, it was just one of those days that are wonderful, from start to finish!

THIS is what traveling is all about!!!!!

Posted by Phebe and Richard at 4:04 AM