Snorkeling and Dancing in Gizo 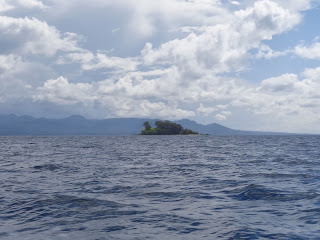 We went out snorkeling today with the local dive operator, Dive Gizo.  It's been a while since either of us dove, so we thought we'd start out with snorkeling to check out the current, conditions, marine life, etc. 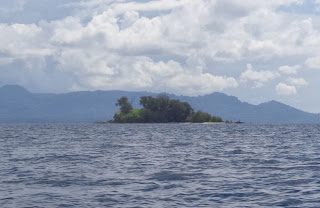 It was WONDERFUL!!!!!  We went out with two people who are completing a few tasks for their dive master qualifications - Jules, who is English (and a woman), and Jendrick (I think I spelled that correctly) who is German.  Their instructor is Fabian, who of course is French.  Our boat 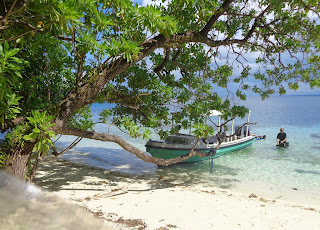 captain (whose name I missed) is a Solomon Islander.  And then we made up the Caribbean contingent.

We went by Kennedy Island - this is the tiny island that JFK swam to, towing his injured shipmate, after PT-109 was sunk.  His friend was named McMahon - 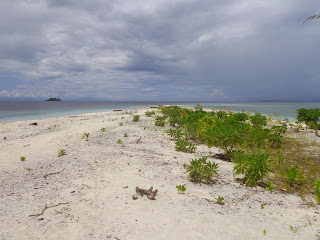 and that is the name of the school I visited in Tulagi - I think it probably was named for him.  (Yes, there were a few other survivors who swam to the island with them - but JFK and McMahon get most of the notice.)  A few Australians saw the explosion, and sent two Solomon Islanders to rescue the survivors - it took six days before 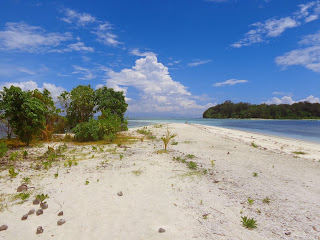 the scouts, Biuku Gasa and Eroni Kumana, found the crew on the island (dodging the Japanese and fighting as they paddled around in their dugout canoe).  Local story is that, years later, JFK invited Gasa and Kumana to his inauguration, and they arrived all ready to attend - but since they didn't speak any English, the secret service agents wouldn't let them in.  Can you believe it?
So yes, this is Kennedy Island.

We headed to a lovely little island; no one lives here permanently, but there were one or two fishermen who were camping out and who came by to say hello.  Richard and I snorkeled around, the two dive students practiced towing each other while being timed, and then they went off for their qualifying tasks.

We found gorgeous coral in pinks and lavenders and greens and whites - although there was a fair amount of dead coral as well, since there have been some earthquakes, tsunamis, and cyclones within the past five years, and all those natural disasters impact the coral as well as the land.

For people who don't dive or snorkel - the sea really is a whole other world, absolutely magical.  The coral formations look like fairyland, all kinds of shapes that wouldn't make sense in an element like air, where gravity is a consideration - in water, shapes aren't hindered by the pull of the earth, and coral grows in all directions.  There were lacy black and red fronds of some kind of soft coral, looking like tufts of feathers sprouting out of rock.  Intricate coral that was like deer antlers in white but tipped in purple.  Raspberry-pink coral like tiny clusters of baby's fingers.  Some like grape hyacinths.  All with fish darting all over, in contrasting colors, and with their own signature shapes and patterns.

Most exciting, we found several family units of clown fish!!!  Real clown fish, of Nemo fame - bright yellow-orange, with two heavy white stripes edged in black, basically the face, middle stripe, and tail being the only orange-y parts.  With a cute little inquisitive face, they watched us watching them snuggle down into their anemones and get comfy for an afternoon nap.  Well, the adults seemed to be napping, with the tiny babies flitting around and playing and trying to disturb the adults.  So much fun!

There was a bit of rain, we got cold and swam to shore, and hung out watching the butterflies swarming to one particular tree, trying to get out of the rain but also alighting on the flowers and enjoying a snack.  After a while, the entire tree seemed to be flittering and fluttering, there were so many butterflies all over it!

Eventually the others came back, and we had a nice lunch on the beach - sandwiches with optional vegs, fruit, and lots of water.  We chatted while the divers had their surface interval, and we compared notes about what we saw in the water.  (They saw two dugong, which are the Pacific version of a manatee!  Exciting!)

And of course we talked about our travels, their travels, exchanged information about what to see and do where - because that's what travellers do, share ideas to optimize one's experience.

Then it was time for second tank and our afternoon snorkel.  We had some discussion about where to go so that we'd have a beach we could hang out on when we got tired of being in the water - so we went over to Sandy Isle (I think that was the name) - basically, this is a tiny coral atoll, just a pile of sand and a few trees on an underwater pile of coral.  There was one tree big enough for shade, a few bushes, and the rest was beach.  It was glorious!  We jumped into that liquid aqua blue and swam and snorkelled around, marvelling at the huge blue-purple sea stars (a good 10-12" across - 30 cm? or so) - plus another family of clown fish, some neon turquoise fish that seem to glow from within, including tiny baby version of those, barely a half inch long.  Bright blue fish with red tails, various coral in Wonderland shapes, and I was practicing 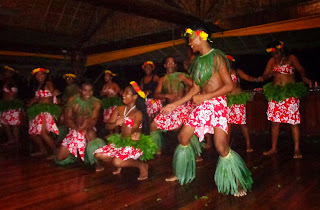 sounding like Darth Vadar as I breathed loudly into my snorkel.

We headed over to the drop-off, where the low coral and sand drops down into deep blue sea, to watch some big fish swimming around.  We were hoping to see 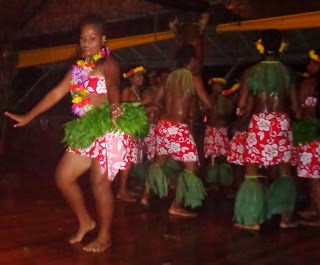 a turtle or two, but no such luck.  No rays either.  And, happily for me, no sharks!

Eventually, we headed back to shore.  The captain headed out to pick up the divers, and we came back to Gizo.  WONDERFUL day!

Richard and I did laugh a bit - 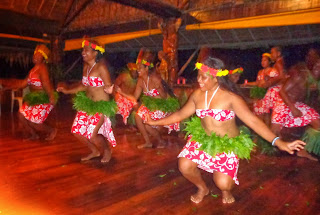 everyone was probably in their mid-20s to mid-30s.  And they insisted on helping the two of us in and out of the boat, or carrying items for us, and all that.  We are so unused to thinking of ourselves as older people and aren't ready for the help and deference that occurs in parts of the world - though as I told 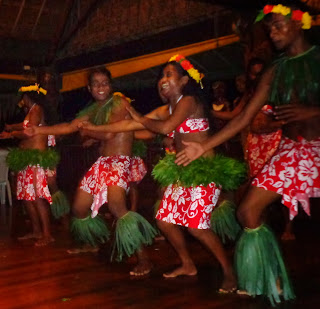 Richard, there's going to be assistance and deference for our age from here on out!

We plan to do a wreck dive tomorrow - many of the warships that went down during WWII were hit by a bomb or torpedo, and if they didn't blow up immediately the captain would head for the nearest shore, hoping to save as many men as possible.  So many of the wrecks are in fairly shallow water (read 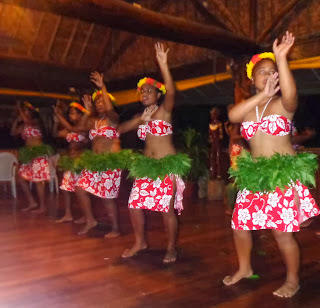 So, yesterday I promised some photos and a little story about the dance troupe.  We had a nice light dinner (the joy of ordering what Americans call appetizers, and the rest of the world calls an entree), and were finishing up when this dance group showed 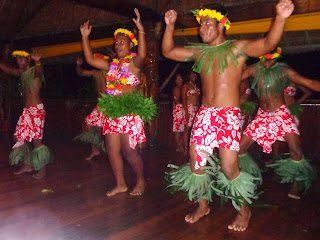 up.  The kids headed right in to the front of the room (right by our table), the kid who seemed to be the leader made an announcement, and they went into their routine.

They were great!  As Richard said, we've seen dancing on most of the Pacific islands we've been to, and the adults are more 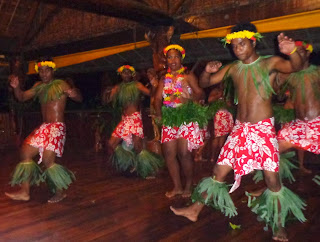 polished.  But NO ONE has more enthusiasm than the teenagers, so they are more fun to watch.  This troupe was great.  The boys do the usual super-macho dances - beginning with a couple of deep-voiced yells, a stomp or smack on the floor, a pose designed to maximize muscle exposure, and they're off with leaps and kicks and arm gestures to show rowing or 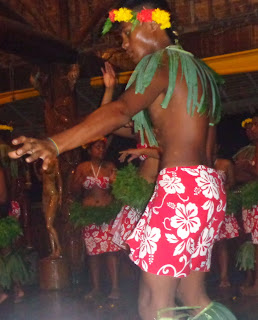 hunting or fighting - punctuated by more yells, stomps, and of course the gorilla-Tarzan chest thumps.

The girls, of course, do the hula-type dancing, with graceful arm movements mimicking flying birds, gentle waves on the shore, maybe light rain - all while shimmying and shaking and gyrating their hips to a totally different drummer.  And with the leafy hip-ring which really enhances the mesmerizing quality of the swaying hips. 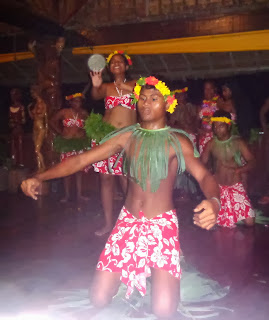 There was one girl, possibly a little older than the others, with definitely a more mature figure - she really had the hip action down!!  The music and her hip movement, side to side, with rhythmic pauses, almost rivalled burlesque! 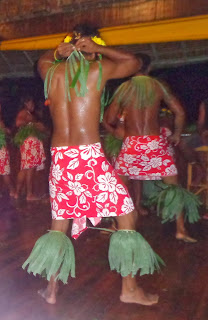 I think the dances that the guys do would actually be more fun, because they're so much more active and there's much more variety to the steps and movements.  But the women's dancing does have a grace and beauty to it, albeit in a very seductive manner.  The sinuous quality is, well, almost snakey.  Definitely Eve as the temptress!

There was one dance where the music became a drum solo (it was all recorded music) - and with the yells and thumps and swirling hips, I don't know what happened - but suddenly it just sounded like an erupting volcano with the islanders trying to calm the furious giant in the mountain, and get him to go back to sleep.  I really don't know how to explain it - I just suddenly felt, in my stomach, a volcanic eruption, and everyone seemed to be trying to appease the mountain.  Weird!

As usual, the boys tried to out-do each other with the kicks, slaps, thumps, yells.  The young man who acted as announcer would get the guys all riled up before each dance, so that they'd come out jumping and leaping and vying for attention - which of course makes for a better performance.

It was a wonderful show, and I think the two of us were clapping louder than the rest of the audience.  It wasn't much of an audience - there was another table with what appeared to be a large tour of Japanese tourists, many of whom looked like THEY might have been here in WWII.  Seriously, several of the men were probably close to 90.  With their wives.  Maybe a son or daughter here or there.  The youngest woman seemed to be the tour guide.  They didn't seem as interested in the dancing as we were, except for one woman, who left her dinner to sit in the middle aisle between tables, and photograph everything.  Really, she was snapping photos at lightening speed.  And at the end of the performance, she posed the dancers and took their photo, and then they had her join them and someone else took the group photo with her in the middle of these very enthusiastic kids - it was very funny!

Posted by Phebe and Richard at 2:24 AM