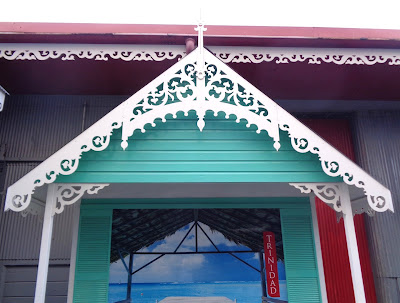 The ship docked at Port of Spain, Trinidad.  We got off the ship and there was a school steel pan band playing 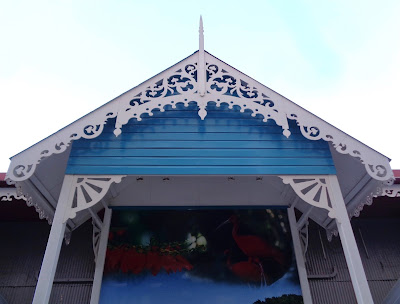 music, right on the dock.  The students looked to be roughly ages 12 to 15, just like my students.  Some were playing seriously, others playing around as 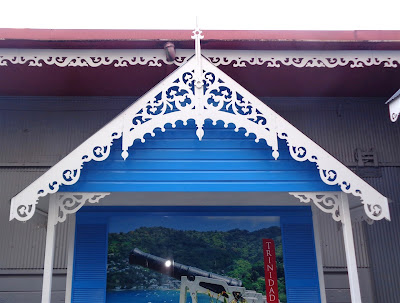 much as they were playing music.  I watched them play on as passengers came off, posed in front of the band, took selfies, and headed out.  I 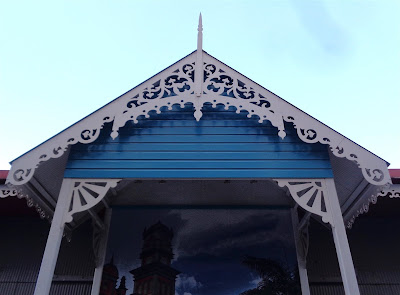 was so excited to see the school band, I completely forgot to take any photos of them!  But when the song ended, I chatted with the kids and their 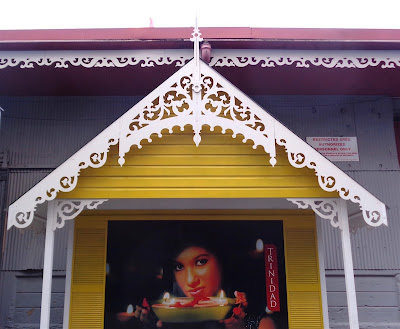 teacher, to find out what grade (or form, here in Trinidad), and explained we’d lived in the USVI and that my school had a steel pan band as well.  Times like 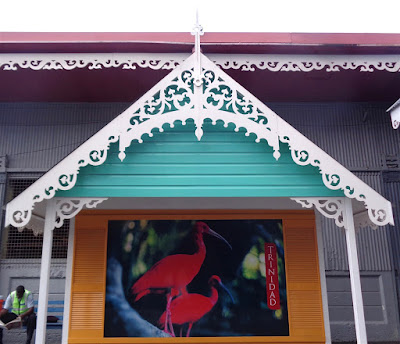 this make me really miss teaching!

There were also sweet little house-like structures along the dock, in bright colors with lovely 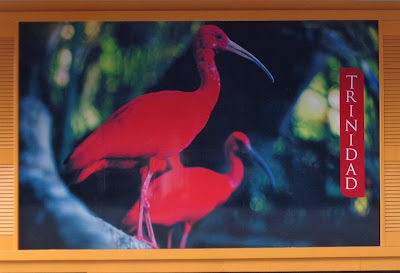 gingerbread trim, reminiscent of the old-time cottages in many of the Caribbean islands.  These all featured sites and sights of Trinidad and 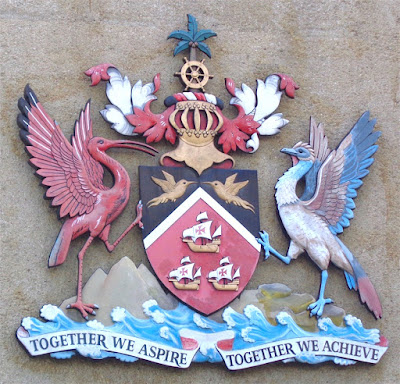 But rather than taking a tour around the island, we opted to wander the city.  Not wandering aimlessly.  No, we were on a quest to find the best roti shop in Port of Spain.

We received the name of the best roti in the city from a man selling stamps in the market.  We set off, walking down the street but unsure if this was really the street we should be on.  We’d walk a few blocks, ask directions, chat with the people we’d asked directions from, and walk some more.  There are city guides wearing red shirts and helping lost or confused tourists, but somehow we never could find one of them when we needed help.

Several blocks into our quest, a lovely young woman overheard us asking for directions.  She knew the exact shop we were looking for, so she said she’d show us where it was.

Turned out she’s a professional tour guide, and had spent the morning leading a group from our ship.  She’s also studying Spanish at the Venezualan embassy, as well as working on her track and field skills.  Her goal is to good enough to get on the national track and field team – so in a few years, look for Aiesha on the Trinidadian Olympic team!

We had a great time talking with her as she walked us to the shop and helped me order my shrimp roti.  Now, for people who don’t know what roti is – this is a traditional Trinidadian food that has its roots in East Indian cooking, but has changed and spread throughout the Caribbean.  Roti is the name for bread or bread products, but has come to mean a very thin pancake or tortilla like bread, usually made in two ultra thin layers with chick pea flour or dry dal (lentil flour) in between the two layers.  The roti is laid flat, filled with curried potatoes and garbanzos, and vegs if you want, as well as the meat/fish of your choice.  Then it’s folded and wrapped up, and you eat it either like a burrito, or open it out and eat the inside by picking it up with pieces of the roti, sort of the way Ethiopian food is eaten.  Either way, it’s delicious and rather messy.

So I had a fabulous shrimp roti, my absolute fave.  With just a little hot sauce added in.

Richard isn’t a fan of curry, and all the meat was curried, not stewed, so he skipped the roti.

We finally headed back, and passed a bank with the national seal of Trinidad and Tobago, which Aiesha explained to me – and this is why we like to meet and hang out with local people.  The two birds represent the two islands, the red ibis for Trinidad, and the white and blue bird (the name was something like cockerel, but I’m not positive if that’s what it was) for Tobago.  The central shield has the ships representing Columbus’s ships, because Columbus really did arrive on these shores.  Above the ships are two hummingbirds – the indigenous people called the islands “land of the hummingbirds” because there are seventeen distinct species here in these islands.  So that’s the national shield.

Eventually, we found the walkway along the water, and Aiesha was ready to head on.  We hugged goodbye, and told her we’d be forever grateful for her assistance.  Plus we’ll watch for her in the Olympics in four years.  Really, she was about 6 ft tall and gorgeous – and just the nicest person!

We had dinner with two professors from California, and are looking forward to a day on the beach tomorrow in Tobago! 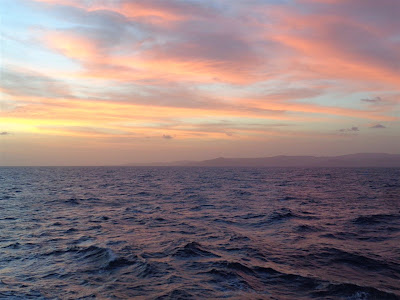 We were supposed to go to Scarborough, Tobago, today.  However, once again Richard and I managed to 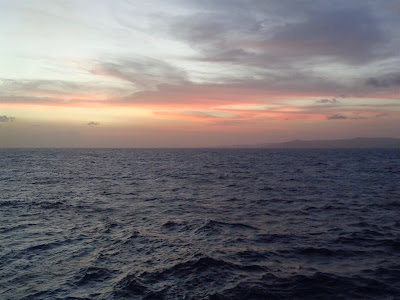 have our own exciting adventure without even trying.

Something happened to our toilet early this morning, where 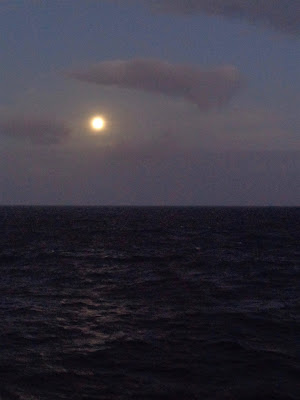 it started flushing and wouldn’t stop.  Except that while the water kept flowing in, the trap didn’t open so the water came pouring out.  POURING out.  Gushing!  Clean water, but splashing all over the bathroom floor.  And then out of the bathroom and into our stateroom.

Richard tried dealing with this without waking me, but of course I woke up.  We called the only number we knew, room service, and they gave us the number to call the front desk.  The front desk lady came and tried flushing the toilet to see if it would catch and stop.  Of course, Richard had tried that, to no avail.  Didn’t work when the lady tried.  She called her supervisor, who tried something with a knife.  Nada.  They finally called the plumbers, who tried some repair from the bathroom.  Nope, still water pouring out.  So they opened the utility room next door and shut off the water to our room (and possible the entire section of room).

By now we had puddles across our entire room, and people started coming out of the neighboring rooms to report that they were getting water in their rooms!  Uh oh!

So cleaning this up is a huge process, starting with wet vacs, then fans and dehumidifiers, following up with a rug shampoo and more wet vac and more fans.  Twenty-four or more hours to clean this up.

We got moved to a new room.  And actually received an upgrade, since we now have what is called a lanai room – we have a sliding glass door that opens out onto the deck, complete with two lounge chairs reserved for the lanai rooms.

Of course, our suitcases got a bit wet under the bed – so we spread those out to dry, and carried our items in other kinds of bags, plus hanging clothes on a rolling rack.  It wasn’t too major, but it took half the day.  So we never got off the ship, and basically just packed up, moved, unpacked, and put everything away.

The guest services people kept apologizing, along with the room stewards.  We kept saying it was okay, things happen, we could handle it.  I finally told one of them that I know some people get very upset about things like this, but that we aren’t like that.  This was a situation that wasn’t anyone’s fault, something just broke, and we’d move to a new room and it was fine.  They later told us that they’ve arranged for a free spa day for the two of us to enjoy, as their way of saying how sorry they were for the inconvenience.

So, my only photos of Tobago are as we left, after my lovely afternoon tea.  We relaxed in the sunset (on our reserved lounge chairs) as we pulled out of the port and headed northward toward Barbados.