The Cat Guards of the Central Market 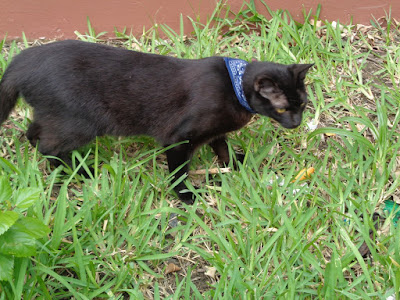 Yesterday, Saturday, we walked over to the Central Market today, enjoying the 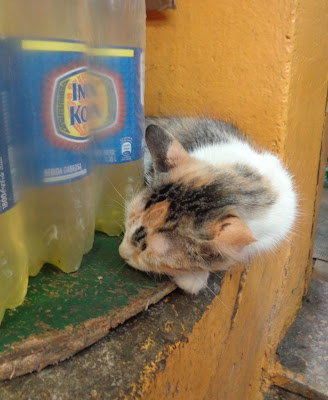 morning air before Guayaquil reached its usual hot, humid, and 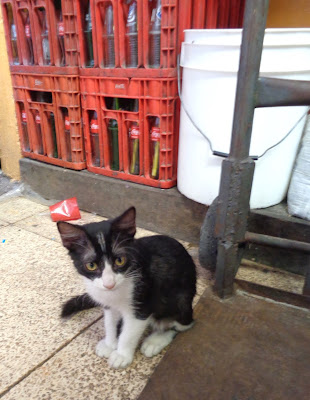 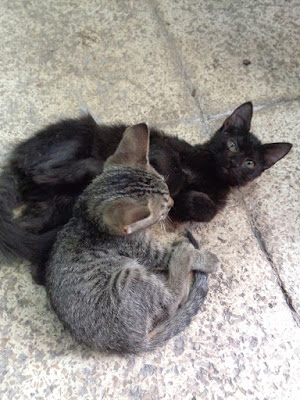 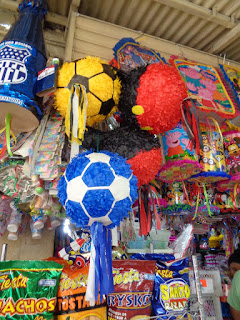 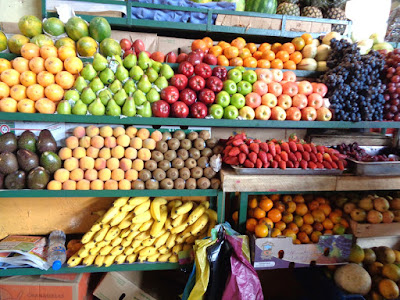 temperatures.  We just sort of meandered away from the river and headed vaguely along the route I had mapped out. 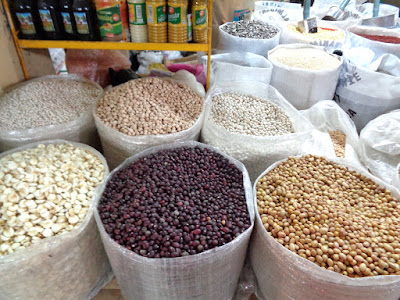 (It isn’t easy following a map or route – even in the cities, streets change names along the way, so while we turned at the planned street, later on it had a different 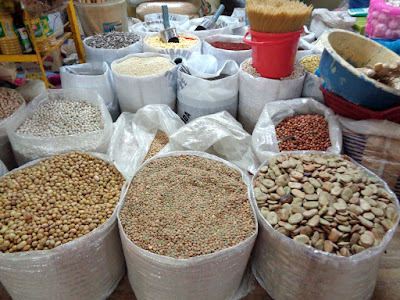 name so I wasn’t sure if we were heading the right way.  I swear city councils do this to confuse tourists.) 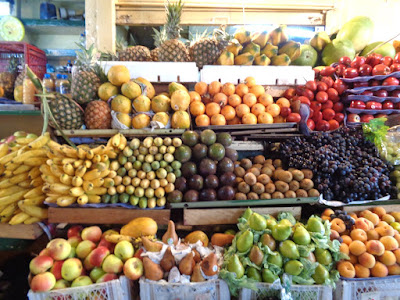 looked like a military building, almost like a citadel – but someone I asked on the street said si, Mercado Central, the Central Market. 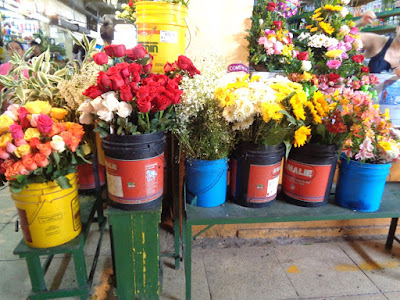 We were greeted outside by a beautiful big black cat sporting a jaunty blue bandana.  Okay, so he didn’t exactly come up and meow, he was sniffing 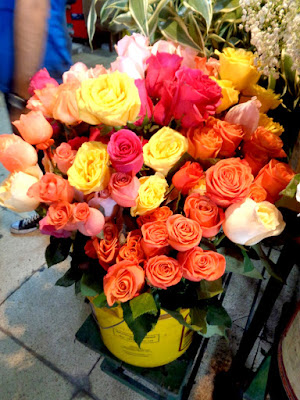 around outside the market.  But I went over to say 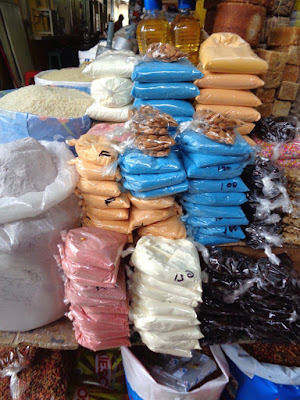 hello, and while he didn’t come up for a pat on the head, he did meow at that point.

Throughout the market, we met a variety of cats who seem to either live or work in the various stalls and shops.  We saw Bandana Cat wandering through, as well as Miss Calico who was sleeping with some soda bottles.  Little baby Handtruck Cat was hoping for some food, or maybe some work.  The two kittens were napping by a cooked food stall, and woke up in time for a bit of wrestling before one of the customers shared his 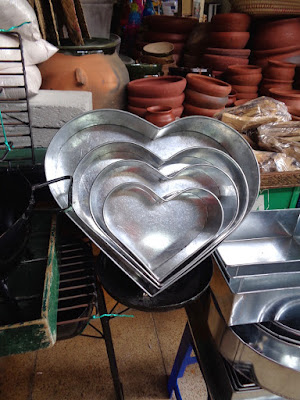 chicken soup with these 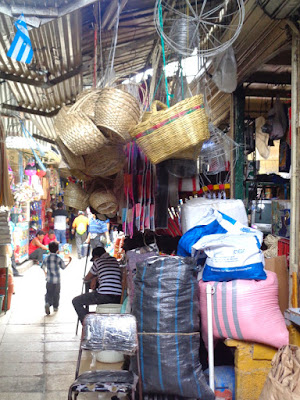 I loved it!  Kitties doing what they do best, looking cute and entertaining, while at night they prowl the market and keep the rats and mice populations down.  What a wonderful way to prevent the rodents from eating all the grains and legumes that are stored each night!

And who doesn’t enjoy a kitten saying hello while shopping?

The produce stands were absolutely gorgeous, like mosaic murals of fruits 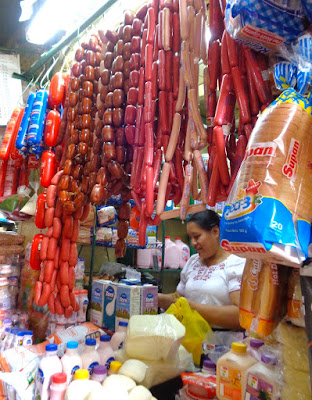 and vegetables, or maybe pointillist paintings – just large splotches of color make of giant dots, all the reds and greens and yellows and oranges and purples.  I always like fruit displays for the colors, but these were exceptionally brilliant. 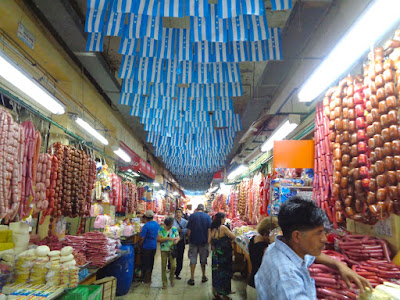 And the size of the strawberries!  HUGE! 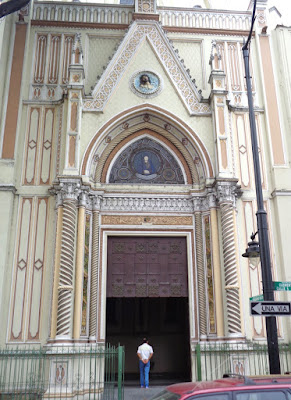 buy the quantity needed by weight rather than volume.  Pet food was sold the same way; I suspect each stall owner sprinkles a little cat food around at night to ensure the market cats will patrol their stands. 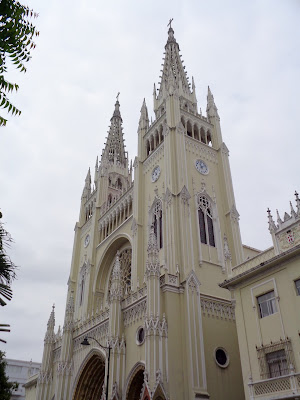 There were beautiful flowers, and people were fine with me taking 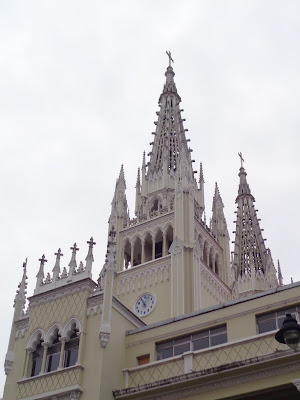 photos.  One flirty gentleman agreed that “Las flores es muy linda” (the flowers are very pretty) and then, well, I think he either said they were as pretty as I was or I was as pretty as them or something along those lines.  What could I do, at 61 it’s still nice but embarrassing to receive random compliments from flirty strangers, so I blushed and thanked him, and wandered off. 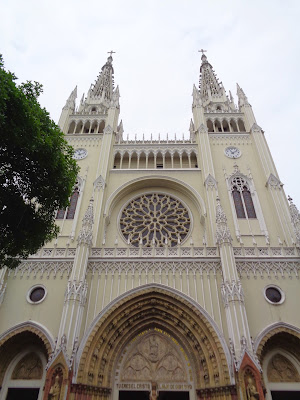 Sometimes sugar was also sold in a brick or block, but that was usually brown sugar.  And then there were the bags of colored powdered something – I’m not sure if it was colored sugar for 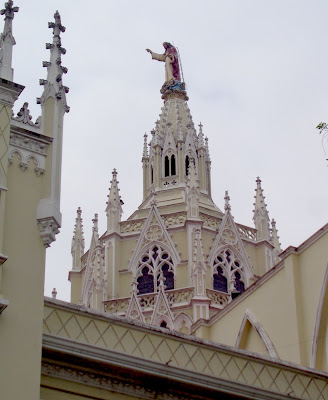 frosting, or just powdered food coloring, or maybe corn flour (since corn comes in a variety of colors) – I tried asking, but the vendor didn’t seem to understand my question, or maybe I just didn’t understand his answer.  I loved the blue, but, well, it could be laundry soap for all I know.

Sausages were hung like beaded necklaces, the links shining and savory.  It was a little creepy to realize they were sausages, because from a distance they look like beaded curtains.  Really, it took me a moment or two to realize these were 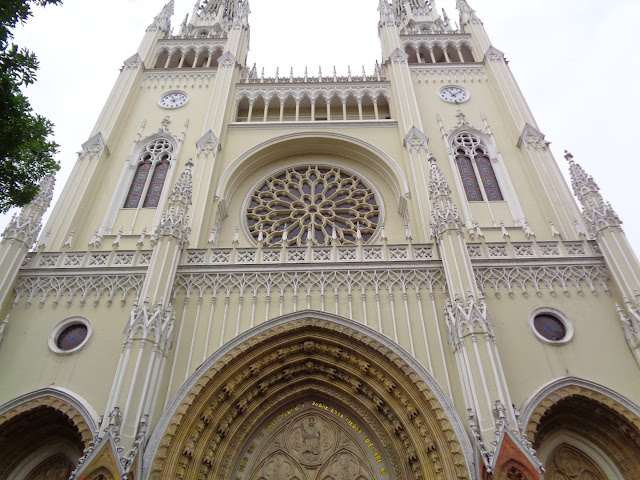 The household goods were also fascinating, with 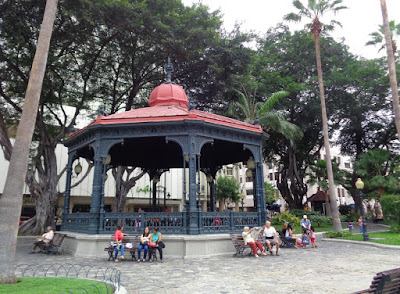 all kinds of baskets, ceramic vessels, pots and pans.  I especially enjoyed the cake pans, which were always nested inside each other, 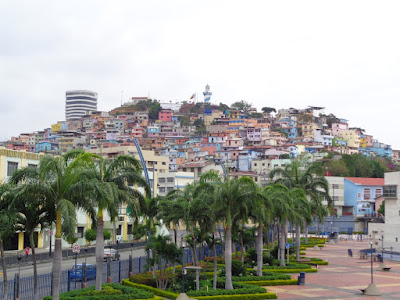 almost like those Russian dolls.  I don’t know if they’re sold in sets, or if the buyer chooses the size they want. 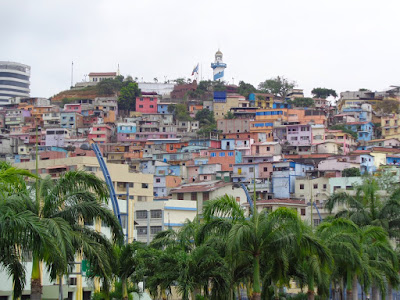 We didn’t buy anything, just walked around and looked, had small conversations in our limited Spanish, and played with kitties as they appeared. 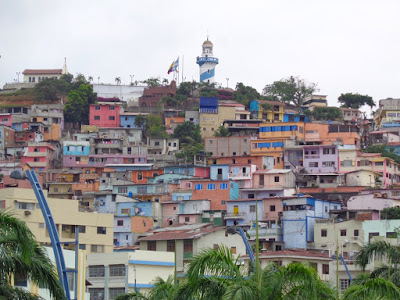 When we left, we wandered into a modern shopping mall, just for contrast.  This was a multi-level building, with shops and a few cafés on the first 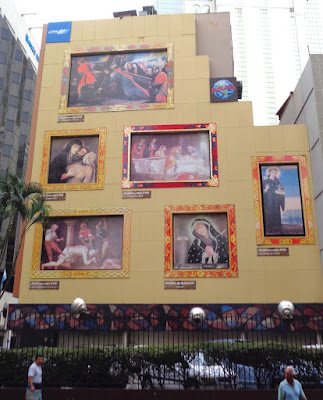 two floors.  The third floor seemed to have only cosmetic and aesthetic businesses.  On the spur of the moment, we both went into the unisex hair salon – I needed a trim and Richard wanted a professional shave.  It was pretty funny, since 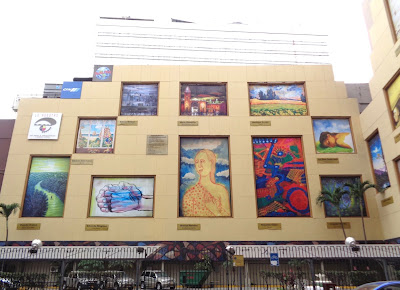 we both tried explaining what we wanted in our minimalist Spanish.  My haircut is closer to what I wanted than Richard’s shave, but we both had a good 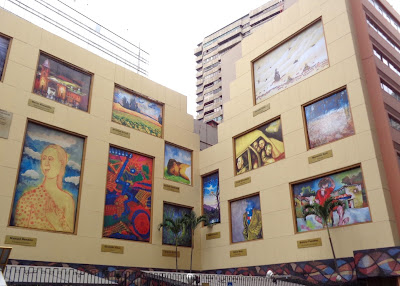 time and an interesting experience.

On our walk back, we found the huge cathedral – it looked like a traditional Renaissance cathedral made out of lace, it was so covered in stone tracery!!!!  Really, this was the fanciest, most delicately ornamented building I’ve seen in a long long time!  It looked like a Faerieland wedding cake or something!  Just light and airy, not like a stone and concrete building.

Sunday in Guayaquil is a surprisingly quiet day, although the morning started with a parade over by the Malecon (waterfront walk).  We heard and saw marching bands, but have no idea what this was all about.  A holiday?  Military something?  Political campaigns?  No clue, nada, zip, zilch, nothing.  No one seemed to know either.  Maybe just something to liven up a quiet Sunday morning.

We walked along the Malecon, skipping the rides for children, the prehistoric mechanized animal exhibit (woolly mammoth swinging its head and tusks, dinosaurs roaring and wagging their tails, that sort of thing), and just walked along the river.  There was quite a crowd out having their mid-day promenade, especially families with children.

Toward the north end of the Malecon, we came to Santa Ana Hill (Cerro Santa Ana), which the guide books all refer to as famous.  Of course, they neglect to say why this hill is famous.  The boxy houses are quite colorful, and the blue and white striped lighthouse on the top adds to the festive look of this little hill.  It was very pretty, but the day was getting hot and so we weren’t inclined to climb to the top.

Oh, near our hotel is a building, the public finance building or some government financial office (given our limited understanding of the sign out front), and several sides are covered with reproductions of paintings.  I’m guessing these are by Ecuadorean artists, some dating back to the 17th century or so, others much more modern.  And the older paintings, mostly by Anonymous, are all very religious in nature; the contemporary art is more general in subject.

While I’m definitely a believer in public art, it’s really weird to look out our hotel room and see a variety of post-Renaissance paintings that essentially are various Stations of the Cross.  Jesus carrying the cross, of being whipped, or being buried, or a Pietà scene – not exactly uplifting material here.  Nor what a hotel with mezuzahs on every door might want to look upon all day every day.  Just sort of a strange but interesting juxtaposition of beliefs and culture, that’s for sure!  But, well, I guess that’s true of much of South America – there are the indigenous people who retain much of their culture, despite having converted to Catholicism; the descendants of the Spanish conquistadors, who brought a new culture and mixed with the indigenous peoples, but sometimes only to a limited degree; there are also other people who came from Europe to escape both sides of the various wars; and then there are the tourists, visitors, and travellers who are just passing through.  Again, a juxtaposition of beliefs and cultures, creating the modern counties of this part of the world.

We’re in the process of re-packing for a twelve day jaunt elsewhere – I’ll keep our destination a surprise, though I’m sure many people can guess where we’re headed.