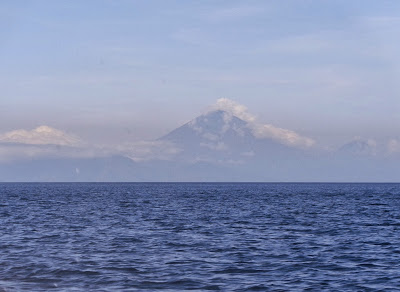 We signed up for another day of diving with Dolphin Dive School – but we requested that we go to a site called Turtle Heaven because, well, it’s where the turtles hang out.  Or at least all the turtles in the know. 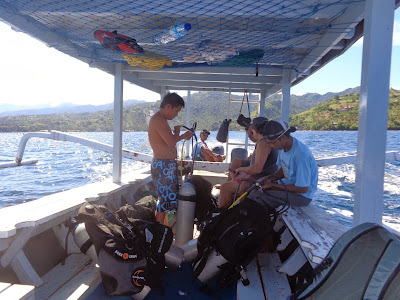 It was a gorgeous morning as we headed out to Gili Meno, the middle of the Gilis.  And Mount Agang was out in all its splendour, looking majestic towering over the sea.  I’m not sure how far it is between Bali and Lombok, but it took two hours to get 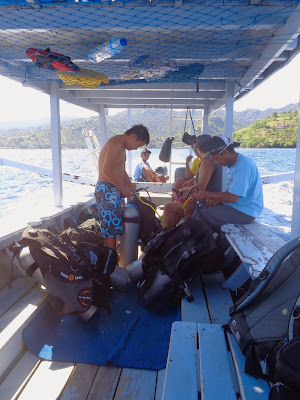 here – so for a mountain to show up and dominate the skyline like this, you know it’s a HUGE mountain!


We arrived at Turtle Point, as it is called locally, and geared up, doing our Lloyd Bridges backwards roll into the water.  Dropped down into the clear blue to maybe 60-70 feet (20-23 meters), and started swimming along.  And almost immediately met up with a big turtle who was sort of sleeping, while keeping an eye on us as we gathered round.  Our dive leader got close and slowly reached out, petting the turtle on a fin.  So I drifted over and reached out, but couldn’t quite get close enough.  (I know, you really aren’t supposed to touch the sea life, but turtles are just so cool.  And they’re very mellow – it isn’t like petting a shark or anything mean.)


Well, turtle got tired of us and decided to swim off, so we continued on our way.  I watched a clownfish family playing in their anemone (they always make their homes in anemones because they’re resistant to the anemone toxins that are harmful to other fish).  And then we saw an octopus – it was resting on some dead coral, looking the same colour – but then it noticed us, got mad, and changed to a deep purple!  And then it swam and hid under a shelf in a rock.  (Richard missed the octopus, because he found a juvenile turtle and watched that.  I don’t know how I missed the second turtle!  Booo!)

We ended up finding another young turtle who was hanging out in a niche between some rocks and corals, and he was okay being watched for a while.  But then he also had had enough of us, so he swam out of his nook and went a few yards ahead, and settled on the bottom.  So I slowly swam over and hung out with him, and slowly approached, giving him a few pats on the shell (which is very smooth and silky), and then a pat on his head (which is like bumpy leather).  He decided he didn’t like being patted and pet, so he gave me a look and left.


There were other interesting things on the dive, but those were the highlights.


Then up, back in the boat, and off to Gili Meno for lunch and our surface interval.  We hung out in a few of those open bungalow things and enjoyed a nice meal and a rest.


Back in the boat, geared up, backwards roll into the water for a long wall dive – just a very long wall of rock covered in coral and anemones and soft corals, making great places for fish to hang out.  There were some big silver fish and some small red soldier fish who seemed to be almost hiding among the corals, looking mostly like little mountain goats clinging to the side of a huge hill.


We found another turtle, this one eating some stuff – our dive leader tried to feed the turtle some of whatever it was, and the turtle took a taste, but then went back to foraging on his own.


More clownfish, more bright colours, and then a moray eel!  A huge, mean, green moray huddled in a cranny, breathing in and out with his mouth open so you could see all his teeth!  They always look mean and ominous, though it really is more just about the way they breathe.


So another 40 minutes or so underwater, then it was time to come up and get back in the boat.


By now the wind had come up so we had good-sized swells, which always makes it even harder to get into the boat – but we managed.  We headed over to Gili Trawangan, the biggest of the Gilis, to drop off the other diver, Justin, from Malaysia.  And then we headed back to Lombok – heading right into the growing waves, somehow smacking each one so that spray flooded our boat, and Richard and I got soaked.  Not that it mattered, we were already wet, but the sky clouded up and it started raining, so it was just a cold wet (rather than the warm ocean we’d been diving in).  It definitely was an adventurous trip back to shore!


So we’re back in our room, warm, dry, clean, and thinking about what we might do tomorrow, our last full day in Lombok.