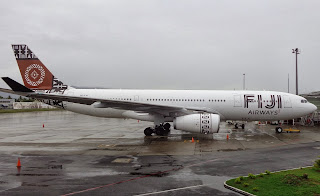 We left Fiji on Tuesday, in one of the prettiest commercial jets I've ever seen.   Really, why doesn't every airline decorate their planes with local art?

Fiji Air is actually a REALLY nice airline.  I ended up in the middle seat, since Richard 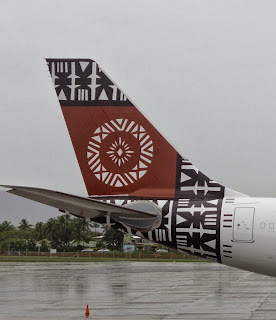 really needs more space than I do - but the man in the aisle seat was bigger than either of us, and was part way into my seat - enough that I couldn't even lean back in my own seat, and I was kind of smashed up against Richard.

I asked the flight attendant if their was a window seat available, and she very nicely found one just a row up and across the aisle, where there was a man in the aisle seat and no one else in the row.  She said I could switch seats once we complete takeoff and level out.  I told the man next to me that I like to see where we're going - and as soon as that seatbelt sign went off, I kissed Richard, told Mr Big Guy that they could both spread out a bit, and I went and got my window seat. 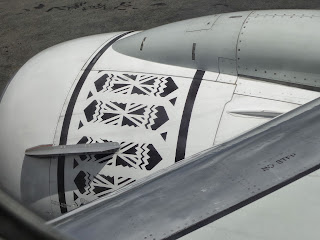 Fiji Air flew from Nadi to Port Vila, Vanuatu - and in that one hour flight, they gave each of us a drink (juice or tea or coffee) PLUS an individual mini-loaf of banana bread.  We sat on the plane in Vanuatu for nearly an hour, then other passengers boarded and we took off for Honiara, Solomon Islands.  This was almost a two hour flight, and we each received a box with three mini sandwiches (like for afternoon tea), juice (mango mix - agh!), yogurt, and a mini pack of cookies.  Plus more drinks. 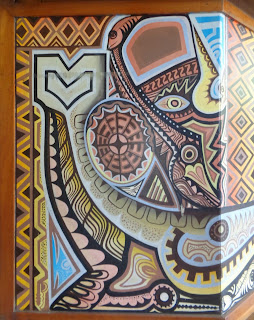 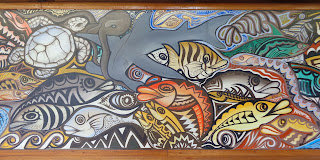 So if you ever need to fly out of Fiji, make sure 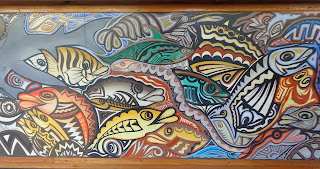 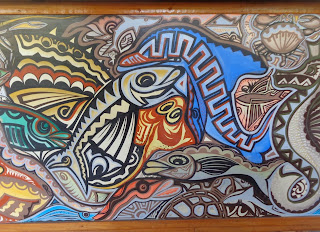 Anyway, we landed in Honiara, made it through Customs, all that jazz.  The airport had very interesting artwork, both sculptures and paintings, all more reminiscent of East African art than South Pacific art.  However, most airports and Customs/Immigration areas get very upset with people taking photos in their domain, so I didn't even take my camera out. 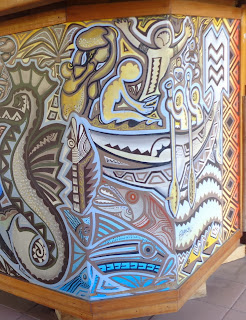 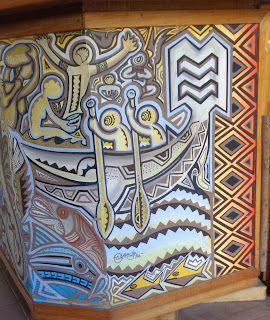 We found a nice taxi (driving a New Zealand All Blacks car!), and got a ride to our hotel, Iron Bottom Sound Hotel.  Weird name, huh?  This is history.  First, Honiara is on the island of Guadalcanal.  I know, I always thought that was some kind of canal.  Nope, it's an island.  Site of some of the epic battles of WWII.  Major important location for historians and people interested in wars.  Second, the Guadalcanal Harbour is full of warships that went down in various battles - so the harbour has all sorts of metal warships on the bottom.  Hence the name of Iron Bottom Sound.  Our hotel has a mural map of the area, and I'll get a photo to post tomorrow.

But I was mostly fascinated with the painting on the reception desk, a wild, almost tessellated design of sea life, filled with tribal patterns and African mask faces and almost Keith Haring-like people rowing their canoes.  I LOVE it - just so wild and bright and welcoming and fitting with the whole atmosphere of the Solomon Islands.

Okay, some of us really didn't know where the Solomon Islands are.  You know how Papua New Guinea looks kind of like a dinosaur?  Well, the Solomons look like the eggs that were laid by the lady dinosaur - just a few steps behind the tail of that mama brontosaurus. 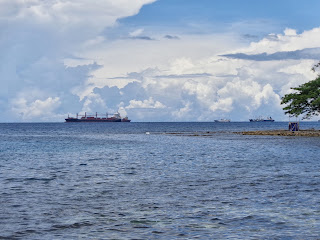 So the Solomon Islands are basically a group of islands that have been lumped together to form a country.  Actually, they are part of the British Commonwealth, and the Queen is the head of state, with a Governor who is acting on her behalf in the country.  There has been ethnic unrest in recent years, because each island has its own culture, customs, language.  Just one more 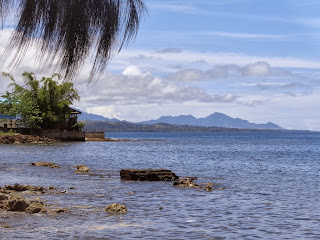 example of colonial powers who create a country out of related but different groups of people, and then don't understand why everyone doesn't feel part of the country.

The Solomons are part of the Melanesian islands, meaning the people are dark skinned.  Actually, to me the people as well as the art look African in origin.  It's one of those mysteries - did the people of this part of the world come originally from Africa, or Asia?  How did they get here?  Why did they come here? 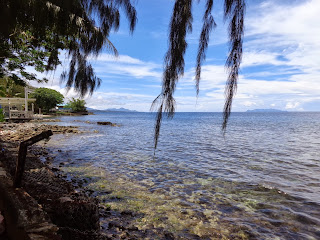 But the Solomon Islanders look more like Papua New Guineans and Australian Aboriginal people than they look like the Polynesians of Samoa, Tahiti, Hawaii, and so on.  People here have dark skin, African hair (which my students in St. Thomas called "nappy"), and more African facial features.  So I really don't agree with the theory that these people came from Asia, and spread throughout the South Pacific.  To me, the Polynesians look more Asian (think Thailand, not Japan); the Melanesians look 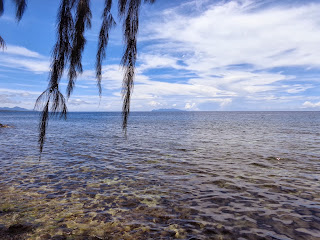 African.  I don't know if there were two migrations across the Pacific islands or what, but based on the purely visual, it would appear that there were two distinct groups who populated these islands.

And, very interestingly, we've seen a lot of Solomon Islanders who are what my Liberian friends called "red" - light to medium brown skin, probably from a mix of African and Caucasian ancestors, with hair that bleaches almost strawberry blonde in the sun, although still of a "nappy" texture. 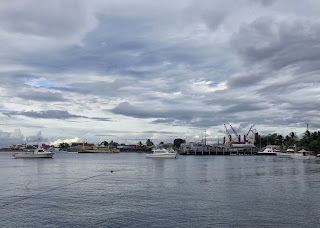 We're adjusting to this new country.  There isn't one local language other than English, since there are something like 90 different languages in this island group.

To respond "yes" to a question, people smile and do a quick eyebrow lift.  Barely visible as a "yes" unless you know that this is one of the potential responses.  (People in parts of Liberia say yes this way.)  Easy to think that people aren't answering unless you look for the eyebrow lift as a response.  People on the street also smile and eyebrow lift to 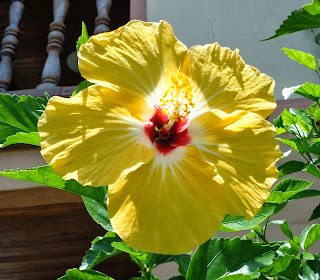 And the weather - you can see, in the photos of the harbour above, the morning was sunny.  By the afternoon, it was pouring rain.  Maybe some thunder in the distance.  By sunset, the rain was stopped, it was a wonderful sunset, but there was occasional lightening in the dark storm clouds over one of the other islands.  Dramatic! 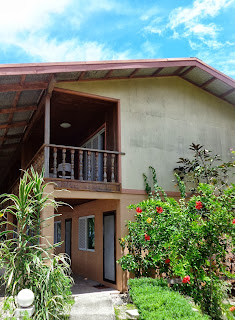 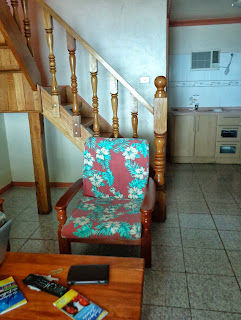 adjusting.  Each country is new, but we manage to find our little niche, our little zone of comfort.   Our hotel didn't have any double beds available in the regular rooms, so our nice manager gave us a two-storey apartment unit so that we don't have single beds.  We have a nice sitting area downstairs, a full kitchen (well, a New York or St. Thomas kitchen anyway), a powder room, and then the 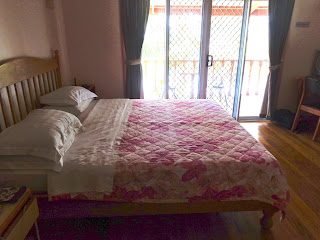 master suite upstairs with a king bed, a luggage and dressing area, a balcony with table, chairs, view of the water, and a full bathroom with one of those tubular showers that looks like you could either be transported to a magic or spy network, or be shot into space.  It's very comfortable, and we have room to spread out a bit, even if we're only here for a week.

The style is kind of rustic cottage, like something you might see in a camping or hunting lodge, with lots of natural wood and deep colors for the upholstery/bedding. 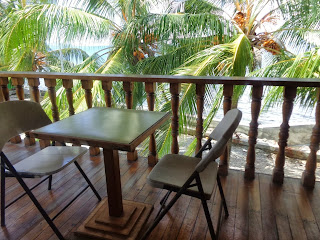 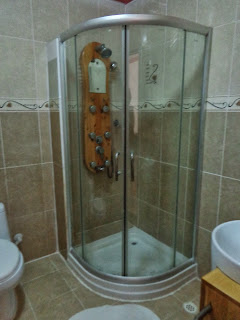 And we're keeping an eye on the view of the harbour - apparently sometimes people see dolphins jumping around, or the occasional dugong, which is very much like a manatee.  Hope we see something exciting in our week here! 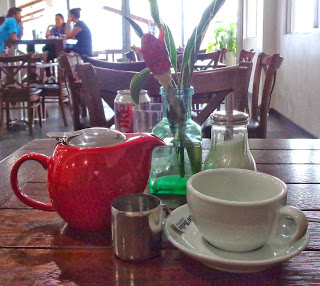 We've already managed to find a friendly neighborhood café, and we've been there twice in our first day and a half here.  Friendly staff, good tea and coffee, nice banana bread, and a view of the ocean.  Today I discovered all kinds of wonderful carvings outside - a couple of heads on the railing, an interesting sea dragon and fish, and a series of sea life carvings on the posts holding up the roof for the outdoor seating area.  (Check out the heads - see what I mean about looking very African in style?  I think it's the stylization of the facial features, 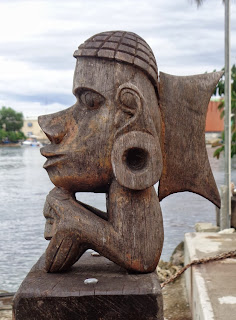 the abstraction that Picasso saw in African masks that led to his Cubist period.) 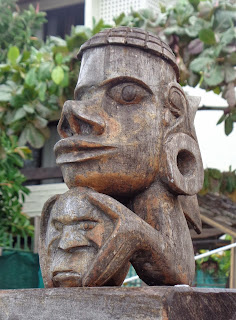 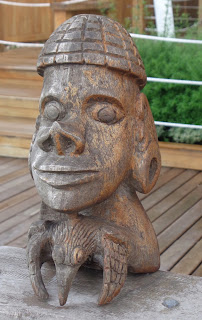 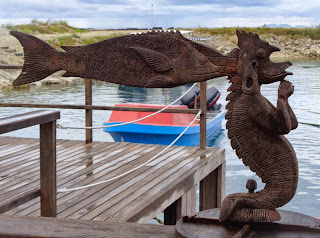 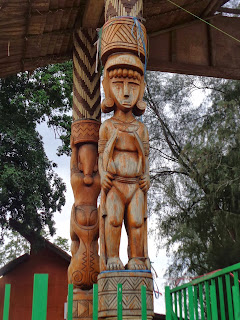 We also found a sort of market at a special site - there seems to be a re-creation of a traditional village, with an interesting entrance gate, maybe a meeting house inside, and a series of little shops or stalls throughout.  Women were selling various crafts, fabrics, and some foods - the sign said something about this being sponsored by the women's community foundation or something.  But mostly, I liked the carved figures making the pillars for the entrance gate.

And of course, there was a beautiful sunset reflecting on the water.  Because this is just that kind of place. 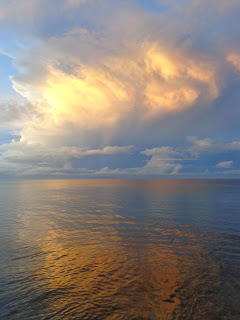 We're also looking into how to get to some of the other islands, where to stay, and of course some diving and snorkeling opportunities.

So we'll keep everyone posted.  And of course we'll keep the blog full of stories, descriptions, and photos. 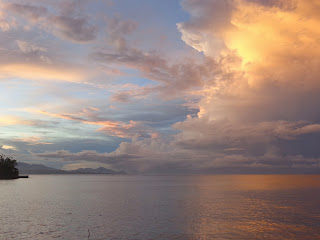 Posted by Phebe and Richard at 3:11 AM