Caught in the Middle of a Koala Love Triangle 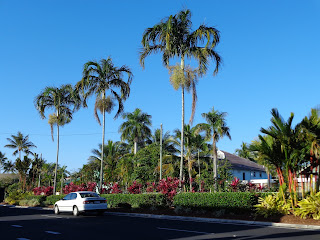 On Tuesday, I got up early and took a bus to town, to catch the little bus out to Kuranda, a village in the Kuranda National Park, in the Kuranda Range.  The various ranges of the Great Dividing Range have names - and the Great Dividing Range is quite close to the east coast, and in some places nearly meets the sea.  This creates the rainforest in this part of Australia, which is said to be some of the oldest tropical rain forest in the world. 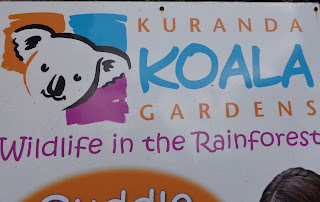 At any rate, I caught the bus to Kuranda, which drove across the coastal plain and then up and into the mountains.  Up up up into the rainforest, a tangle of giant ferns, lush green palms and trees and huge leaves, and a web of vines from Tarzan's dreams.

The village of Kuranda is a sweet little artsy 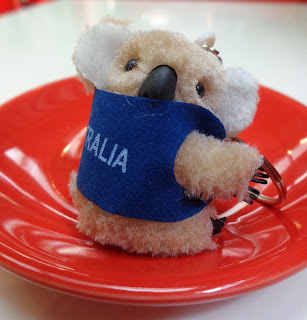 place, once home to artists and a counter-culture, now a bit of a tourist destination for the artsy markets, yummy cafés and bakeries, and the several animal sanctuaries.  Including the Kuranda Koala Gardens, which is why I visited Kuranda.

I arrived early, about 9:15 AM.  Bought my ticket, and they give out a little koala key chain.  Very kitschy, but cute in its own little fuzzy koala way.

I entered the gardens, and wandered a bit.  Most of the koalas were settling down for the day, but a few were wide awake and happy to be breakfasting on fresh gum and eucalyptus leaves.  I watched a cute little female as she climbed around the trees in her enclosure, 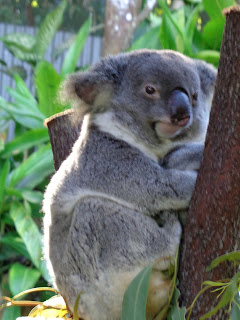 occasionally jumping like an agile chubby monkey from branch to branch, or even doing that macho Marine upside-down hand-over-paw climb to 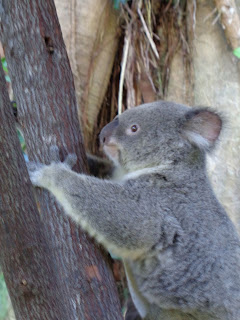 cross a horizontal bar.  She was having fun being the only koala awake in her enclosure, and was enjoying the tastiest bits of leaf. 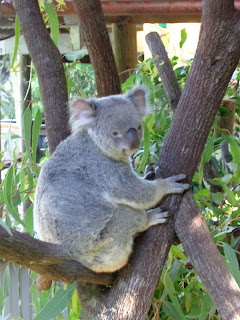 Eventually, people started to line up for their koala cuddle and photo.  Freddy was the first koala of the day, but eventually he became tired, or he 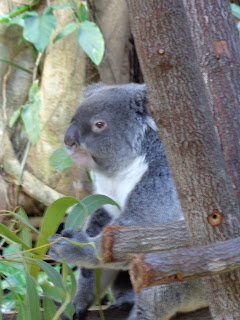 was hungry, or he just had all the photos he was willing to have taken.  He put up a little koala protest (basically by just hanging on to his carer and refusing to go to the person), so another koala was brought out - Princess, the little female I had been watching! 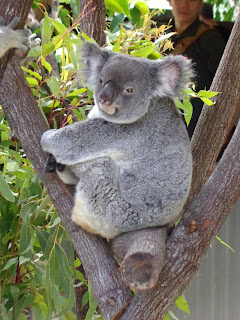 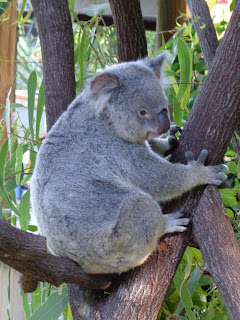 I was up next, and Princess and I had a nice cuddle.  She's just a little female, and the way this place has people hold the koalas, well, the photos make it look like I'm strangling the poor little thing!  In reality, her bottom is in one of my hands, and her front paws and chin are resting in the crook of my other 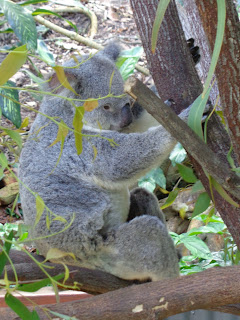 arm, which is kind of raised up - and 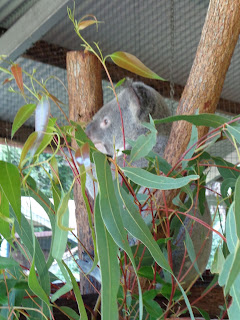 Princess looks like she's falling asleep in ecstacy.  If she were a cat, she'd have been purring.  That kind of look. 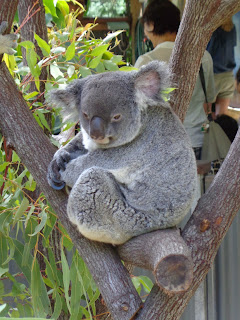 Anyway, I held Princess and she and I had that wonderful koala/human bonding moment, or at least that's how it feels to me.  She snuggled, I cuddled, she smelled like eucalyptus and was all soft and cozy.  I chatted with the carer - Princess is about 7 years old, middle-aged for a koala, and currently in heat.  And she's a bit of a prima donna - she doesn't do anything she doesn't want to do.  And she doesn't always want to be held by just anybody. 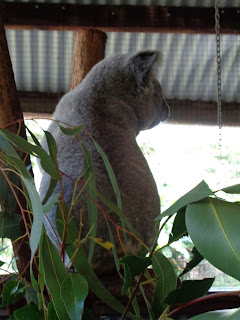 So it was a bit of an honor that she deigned to be held by me.

All too soon, I had to hand Princess back.  And I continued to wander around, looking at and talking to the male koalas in their enclosure.

Well, Freddy had gone back to sleep.  But Hogan was 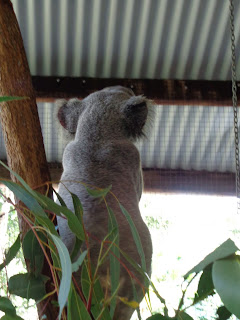 wide awake, climbing around and eating leaves.  I stood there watching him, talking to him, trying to get some photos while he tried to remain hidden in his clump of fresh leafy branches. 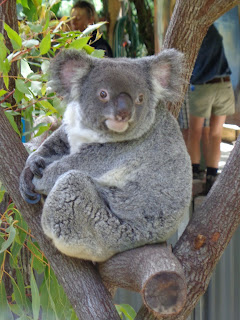 Then Hogan climbed up to the top of his tree in the enclosure - and first he started making these coughing noises.  Then he raised his little bulbous nose and started roaring, like a mini lion!  I couldn't figure out 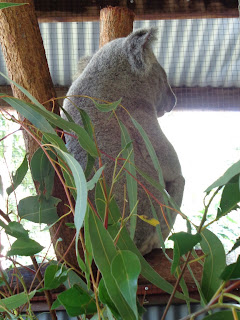 what was going on, and I was afraid he was ill or in pain - I turned around to ask what was wrong - and the carer smiled and said that he's bellowing his mating call to Princess, since she's in heat.

Oh no!  And I smell like Princess to the keen little koala nose!

So here I am, standing there smelling like a koala in heat, while Hogan is roaring his little lusty koala love song, and Princess is trying to pose with tourists while at the same time trying to get over to her love, Hogan!!!  I felt as if I were betraying my little buddy Princess, 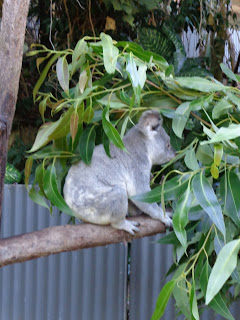 who I had just been holding moments earlier!


Apparently she will sometimes bellow back.  And she has been put in the enclosure with Hogan, although the garden isn't trying specifically to mate them.  But Princess seems to get all happy and frisky when she's in Hogan's enclosure, and we'll see if they have a new joey in a few months.  (One of the other females, Tina, has a joey and thus is out of the rotation for photo opps - no koala "works" every day, they have a schedule so each koala is rotated out of the photo work every few days.)

Anyway, it was a privilege to hear Hogan bellowing for Princess - not too many people get to hear the koala love song as the male roars out his amour.

It really was a special moment!


And just in case there's been too much koala love for some people, here's a nice model of some lovely dinosaur who is in the middle of town, looking ready to eat some unsuspecting tourist.  I'm not sure why he's there.  He just is.  Kind of an existential dinosaur. 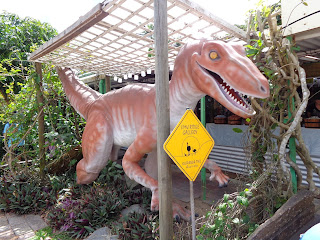 NOTE:  Researchers have recently discovered that koalas actually have two different sets of vocal cords, and they use the second set for their mating song bellowing.  Interesting stuff!

Posted by Phebe and Richard at 7:09 AM